iKeepActive
Create your workout calendar with iKeepActive! Sync to your Mac’s calendar which can then sync to your music player, phone or tablet*. iKeepActive is an integrated activity scheduling system which also interactively counts Calories. Not only does it help create your activity schedule but its primary focus is to make sure you do them by displaying reminders and follow-ups. You can also use it to log your diet, analyze your progress and visualize your results. 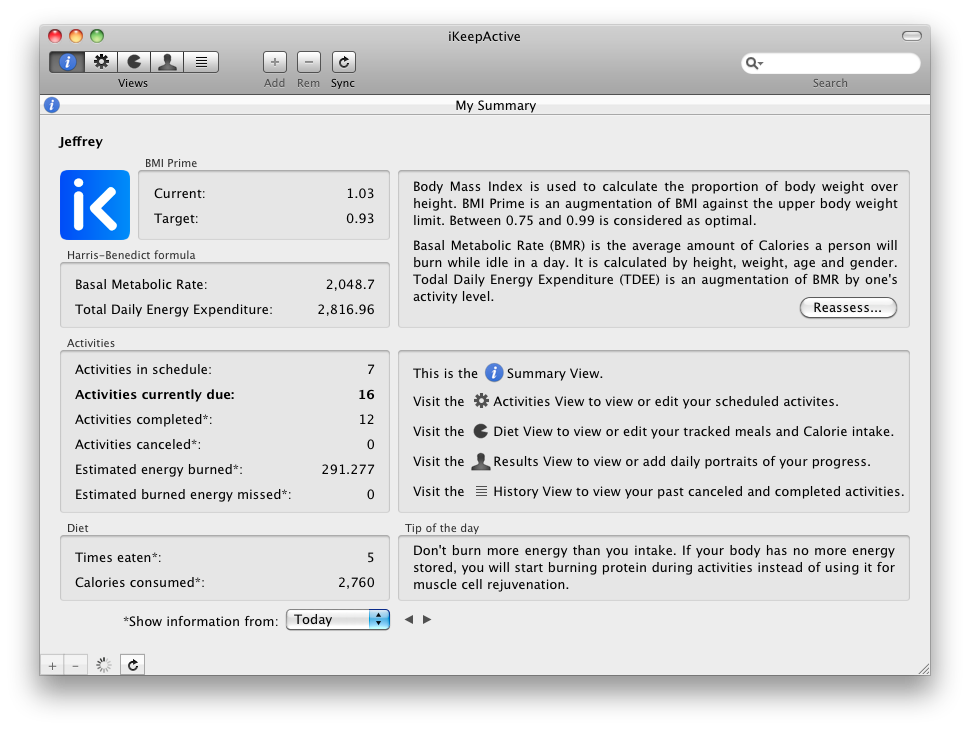 Published on by jeffrey in Announcements, Releases

Both iKeepActive and iKeepActive have been voluntarily removed from the App Store last year, but have been re-instated with new versions in the App Sore after the 2015 Holidays. Both applications include updates to their core functionalities to use the newest Apple OS X APIs EventKit and AVFoundation, retiring CalendarStore and QuicktimeKit, respectively. This will fix compatibility issues with the newest versions of OS X. This also means that support for Snow Leopard, Lion, and Mountain Lion have been retired.

iKeepActive has also been updated with some graphing of your progress and muscle coverage from your workout schedule, while the Lite version only focuses on the API update.

Published on by jeffrey in Announcements, Stories

Both products iKeepActive and iKeepActive Lite have been voluntarily pulled out from the Mac App Store earlier this year and will remain out until further notice.

– Added an average (mean) percentage column to the data table
– Added a line graph showing relative drops in body fat percentage, weight and BMI.
– Added the ability to modify the date that a measurement was taken in the data table (after the fact), in case you are adding backlogged information.
– Improved number formatting, alignment and spacing in the user interface.
– Updated multi resolution application icon for hi-res displays.
– Updated graphics and documentation.

Published on by jeffrey in Announcements, Stories

In spite of the fact that there’s nothing but colder weather ahead for the next few months in the northern regions of the world, it’s important to replace your outdoor activities with winter sports or at least some gym time. And while you might think a little bit of winter fat might help keep you warm, it probably shouldn’t be a goal, especially if you gain more than you can lose. How many people do you think will subscribe for a gym membership next January, and how many do you think will still be going by March? The answer: lots, and much less. On that note, there’s no time like the present and presently it is the perfect time to start (or to keep going if you haven’t yet stopped).

If you, like me, are among the subset of an already smaller group of people who have continued to cycle to work in November, make sure to keep safe. It gets dark outside earlier so don’t depend on your reflectors for cars to see you; get something electronically powered. Now I’m guilty of donning a toque instead of a safety helmet, but what you should really do is find a creative way to keep your ears and face warm while wearing your safety gear.

So besides my advice, how else am I helping you for these fall and winter months? Well, there are new and improved versions of Foods and Moods and iBodyFat waiting for review in the Mac App Store as we speak, meaning they should be available within the next two weeks or so. I have also began work on the next version of iKeepActive, so stay tuned!

Added a new mechanism for tracking when scheduled activities are due in Mountain Lion.
– For earlier versions of OS X, the Applescript system is still used for tracking due activities.
– Rearranged the flow of information on the Summary View for ease of the new user.
– Added 4 more available activities.
– Quite possibly one of the last versions to support Snow Leopard and Lion, so get it while you can.
– Dropped support for 32-bit.

It has been a long time in waiting (especially long for OS X Mountain Lion users), but the latest version of iKeepActive has been approved by Apple, and is now available in the Mac App Store now. The release focus is on Mountain Lion Fixes, but other features and improvements have also been added so updating is recommended for everyone on 64-bit Intel Macs.

– Added a new mechanism for tracking when scheduled activities are due in Mountain Lion.
– For earlier versions of OS X, the Applescript system is still used for tracking due activities.
– Added support for retiring scheduled activities. This allows you to remove an activity from your calendar while still keeping the history for tracking purposes. Retired activities can be re-scheduled.
– Rearranged the flow of information on the Summary View for ease of the new user.
– Added 4 more available activities.
– Quite possibly one of the last versions to support Snow Leopard and Lion, so get it while you can.
– Dropped support for 32-bit.

The lastest update for iKeepActive fixes the issue with the Calendar app not being able to run iKeepActive when your scheduled activities are due on their calendar date, a limitation introduced in Mountain Lion. This version also supports previous versions of OSX, Lion and Snow Leopard. Some new features were also added.

This update has been waiting for approval from Apple’s app review team for nearly four weeks now. Until then, iKeepActive remains voluntarily withdrawn from the Mac App Store, unfortunately even for potential customers on earlier versions of OSX who would not be affected by the issue. Apologies go out to all iKeepActive users who have upgraded to Mountain Lion, who have been suffering from this issue since July.

OSX Mountain Lion has been released the other day, which unfortunately disables support for iCal running scripts. Therefore if you have Mountain Lion and iKeepActive or iKeepActive Lite it will open the script instead of running it when your exercises are due. Please click the run button in the Applescript editor when it pops up.

The application works otherwise, but his small piece of the application is key in bringing everything together seamlessly. In light of this, iKeepActive and iKeepActive Lite has been voluntarily pulled out of the Mac App Store until a proper re-implementation of activities tracking is made, possibly with the new notifications system.

Thanks Apple, for changing your technology yet again, forcing developers to re-think or re-write the way their applications work.

The first 10 eligible Twitter users to publicly tweet #giveaway @iKeepActive and provide a link to these rules will receive a free copy of  iKeepActive, the workout scheduling and calorie counting software for Mac OSX. If you don’t own a Mac, then win a copy for your friend.

The free copies of iKeepActive (each of $14.99 USD value) will be given away in the form of a Mac App Store promo code, which is sent to the winners via private message on Twitter (winners will be announced publicly prior to this). Therefore, in order to qualify and/or redeem the prize, the following must be met:

The contest ends when the 10 qualifying winners are chosen, or when the promo codes expire. The end contest notification will be posted on the same date on iKeepActive.com and on Twitter by @iKeepActive.

Participants’ eligibility for the contest may be disqualified, if there is evidence or suspicion of abuse on the participant’s part. Grounds for disqualification are as follows: